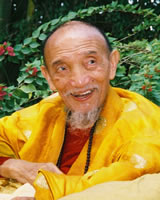 His Eminence was a master of masters as most Tibetan Buddhist lineage holders were his disciples, among them His Holiness the Dalai Lama, His Holiness the Sakya Trizin and the late Dudjom Rinpoche.

After leaving Tibet in 1959, His Eminence Chogye Trichen Rinpoche built two monasteries: one in Lumbini, birthplace of the Buddha and the other in Kathmandu.  Living in Nepal, Rinpoche spent much time in meditation retreat and was thus regarded as a hidden master.

His Eminence passed away at his residence in Kathmandu on 22 January 2007.  He stayed in thukdam (a stage of life after death where the body lies in meditative state without decomposing) for 16 days; after his thukdam he was taken to Jamchen Monastery with a grand parade on the 21st day and was cremated at Boudhanath according to traditional Buddhist ritual under the direction of His Holiness the Sakya Trizin, 40 days after his passing.