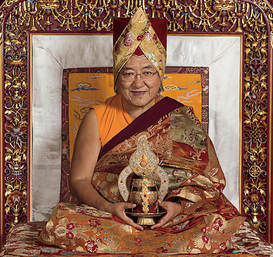 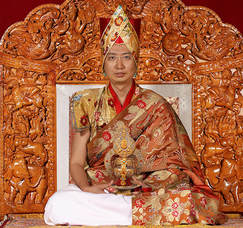 In March 2017, His Holiness accepted the mantle of leadership from his esteemed father and root guru, in his new capacity as the 42nd Sakya Trizin or throne holder of the lineage. In doing so, he will continue to guide and inspire Dharma students from all over the world with his wisdom, genuine qualities of unaffected simplicity, humility and complete honesty, by presenting the Buddha’s teachings in the most authentic way, while maintaining the purest of Buddhist traditions.​

Subduer of ignorance
The second title was received after Yapang Kye subdued the raksha, Kya Ring and married his wife, also a raksha. Their son was given the title Khon because of the union of a celestial being and a raksha. Thus, Khon means 'subduer of ignorance'. Each of these precious Khon lineage holders showed many great signs of holy beings, such as a dharmachakra in the palms of their hands.

The son from this union was father to Khon Pawo Che, who became one of the innermost ministers of King Trisong Detsen (8th Century CE), and at that time Tibet greatly flourished both politically and spiritually. The eldest son of Pawo Che was Nagendra Rakshita, one of the seven principal disciples of Padmasambhava, who received bikkshu vows from the great abbot Sangarakshita. This means that one of the first known monks in Tibet was an ancestor of the Khon lineage.

The younger brother of Nagendra continued the family lineage. Through many generations, practices such as Vajrakilaya were preserved and masters accomplished many attainments. In the 11th century CE, Khon Konchog Gyalpo received instructions from his elder brother, Khon Rog Sherab Tsultrim, to study with the great master Drogmi Lotsawa who lived at Mang Khar. On the way there, Khon Konchog Gyalpo met the senior disciple of Drogmi Lotsawa, Chen Lotsawa, from whom he received many tantric teachings.

Before he passed into parinirvana, Chen Lotsawa advised his student to receive the remaining teachings from Drogmi Lotsawa himself. Khon Konchog Gyalpo met Drogmi Lotsawa and received all the profound tantric teachings from him. He also received many teachings from great masters such as Mal Lotsawa and Bari Lotsawa and others, and so became an owner of the teachings.
Khon Konchog Gyalpo built a small monastery and began teaching, giving profound teachings. His noble activities increased and he later established the seat of the glorious Sakya lineage, as was prophesied within the Manjushri root Tantra, which begins with the syllables SA and KA.

At that time Atisha (981-1054) came to Tibet in 1042. He saw many great signs that indicated that in future many great activities would be accomplished by two Mahakalas. He saw the "grey earth" (SA KYA) and performed many prostrations and made elaborate offerings at that place. He saw the letter HRI and seven DHI and one HUM syllables. Atisha prophesied that one Avalokitesvara emanation, seven Manjushri emanations and one Vajrapani emanation would come to benefit many sentient beings.

Sakya Monastery, Tibet
Sakya
Khon Konchog Gyalpo was living in the vicinity and while walking he saw many auspicious signs, such as white earth that was glowing and a river flowed on the right side, etc. It caused him to think that if he established a monastery at that place, it would greatly help many beings. He received permission from his elder brother and acquired land to establish a monastery, which was named SAKYA.

From that time on both the monastery and the family took on the name Sakya, which is the third of the titles by which the lineage is known. This lineage spread widely in Tibet and later into China, Mongolia and more recently to all parts of the world. 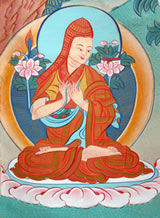 Sakya Pandita
Sakya Pandita
At the time of Sakya Pandita's conception, deep Samadhi arose within his mother and later she had many other signs of giving birth to a great being. At the time of birth a great light filled the entire space and many dakinis appeared, showering him with flowers. As a toddler his mother thought he was speaking childish gibberish and worried that he may have obstacles, but his father discovered that he was able to speak the Tibetan and Sanskrit languages. Not only that, he spontaneously drew Sanskrit nouns and consonants and could read them.

As he grew he was able to understand difficult points of study without having been tutored in them. At that time there were many great scholars in Tibet, but only Sakya Pandita was the first to accomplish all of the five major sciences (art, medicine, Sanskrit grammar, logic and Buddhist doctrine) and five minor sciences
(poetry, drama, astrology, dance and language). He studied with three great Indian pandits (Danasila,
Sugatashri and Samgashri) for almost a decade.

He received the title Pandita from Shakya Shri Badhra (1140-1225) and so was the first Tibetan to have received the highest honour from an Indian master. He began teaching at the age of nine and was known for his abilities to teach simply, unmistakenly and precisely, and he continued without interruption until the age of seventy. He was able to teach Buddhist and non-Buddhist philosophy and the five sciences according to the capacity and needs of his students.

Harinanda was a great Hindu logician famous in the east and west of India who came to Kyirong with five other great Hindu pandits to seek out Sakya Pandita. On meeting Sakya Pandita they did not show respect through prostrations but merely recited a verse of a tantra before being seated near Sakya Pandita. They claimed that they had a pure lineage of Rishis traceable directly to Brahma and so there was no need to take refuge in the triple gem. Sakya Pandita responded by reciting Buddhist verses that developed into a debate that helped them to completely cleanse the stains of their wrong views. Harinanda abandoned his former beliefs and took ordination with Sakya Pandita. Harinanda cut off his ascetic's topknot and this can still be seen at the Great Sakya monastery in Tibet. The consequence of this encounter was that Hinduism never took hold in Tibet.

Sakya Pandita gained the realisation of fearlessness of all knowledge. In order to show the path of liberation to all beings throughout future generations, he composed many commentaries of the sutras such as "The Sages Intent", "The Perfect Differentiation of the Three Vows", "The Treasure of Reasoning" and many others.

Sakya Pandita was the first Tibetan born master capable of translating texts from Sanskrit without reliance on Indian masters. His works were translated from Tibetan back into Sanskrit and were praised by the Indian pandits. He was the first Tibetan master to take the Vajrayana teachings out of Tibet to introduce them to Mongolia and China. Sakya Pandita became famous throughout Tibet, Mongolia, China and India and was considered to be a real emanation of Manjushri in human form.

Sakya Pandita had authentic visions of the deity as a person. Whist receiving guru yoga initiation from his guru Dragpa Gyaltsen, he saw his guru was the embodiment of all the Buddhas in the form of Manjushri. At that moment he perfectly understood the nature of all phenomena and gained infinite realisation of deep samadhi.

For the sake of sentient beings he manifested the appearance of illness. At that time, Shantideva appeared directly to him, giving him teachings on cause and effect; Nagarjuna gave teachings on the four great seals; Manjushri offered Sakya Pandita to be his tutelary deity throughout all of his lifetimes; and Avalokitesvara touched Sakya Pandita with his hand healing him of all discomfort and suffering. There were many other visions. Sakya Pandita also demonstrated unobscured clairvoyance in order to help many other beings.

Sakya Pandita received an invitation from Goden Khan to go to Mongolia. He then remembered a prophesy of Dragpa Gyaltsen made years earlier. Dragpa Gyaltsen had prophesied, "Within your lifetime a person representing people wearing shoes with the shape of a pig's nose, colourful hats and speaking a different language will come to invite you to their land. At that time you must accept this invitation without hesitation for the benefit of sentient beings and the Buddhadharma."

Accompanied by his two nephews he departed from Sakya monastery in 1244. On the way to China he gave many teachings and initiations and eventually arrived at Ling Chui in 1247, where he met Goden Khan. The emperor was deeply impressed by Sakya Pandita's knowledge and after many discussions of worldly and spiritual matters, the Great Khan ordered changes to protocols. In future, the guru would be seated in the highest place and then the monastic Sangha, with the lay community in the lowest position.

Goden Khan and the entire court received many teachings on the vast and profound Mahayana and Tantrayana and so the whole country began to make offerings to the Triple Gem, abandon non-virtuous deeds and integrate the Buddhadharma into their lives.

Through the activities of his body speech and mind Sakya Pandita was able to help countless sentient beings up to his parinirvana one early morning, at the age of seventy, in 1251. The teachings of Sakya Pandita spread like the rays of the sun throughout Tibet, China and Mongolia and produced many great disciples as numerous as stars at night time. Among these were his heart disciples, his younger brother Sonam Gyaltsen and his nephew Chogyal Phagpa, who became his successor. 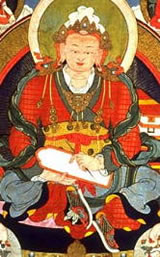 Chogyal Phagpa
Chogyal Phagpa
Many great signs were also seen at the time of Chogyal Phagpa's birth. He was able to remember many past lives. Even at the age of three he was able to recite many lengthy sadhanas and by the age of eight knew all the Jataka tales (the previous lives of the Buddha) by heart. He gave public teachings at a very young age and in this way subdued the pride of the elder scholars, and so was given the name Phagpa (Arya, or holy being). By the age of ten he received the monk's vows from his uncle, Sakya Pandita, in front of the Jowo statue at Lhasa.

At seventeen Chogyal Phagpa travelled to Mongolia and received all the outer sutra and inner secret tantra teachings from Sakya Pandita and gained signs of accomplishment. Sakya Pandita was overjoyed and offered a precious conch shell that is treasured within the Sakya tradition even today.

Sakya Pandita also offered a begging bowl and gave responsibility for the care of all of his students to Chogyal Phagpa, reminding him that in previous lives Chogyal Phagpa had pledged to serve the Buddhadharma and help all sentient beings. Soon after, Sakya Pandita passed into parinirvana. 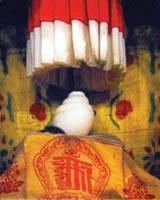 Thus the glorious Sakya tradition ruled Tibet for almost a century. Chogyal Phagpa benevolently supported all the various schools of Tibetan Buddhist philosophy and practice. In this way Chogyal Phagpa fulfilled the pledge that he had made with Sakya Pandita.

The noble Khon lineage was continued through many centuries. Thegchen Tashi Rinchen founded Dolma Phunpal Phodrang (the Glorious Tara Palace) named after a nearby turquoise Tara shrine at Sakya in Tibet. Today it is known as the Dolma Phodrang at Dehra Dun in India and is the residence of His Holiness the 41st Sakya Trizin.
Find out more:
The Sakya Tradition
The Sakya lineage
The five Sakya founders
Sakya masters
Throneholders of Sakya
Lam Dre