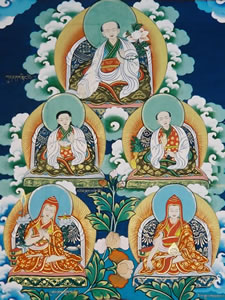 The five Sakya founders, detail of thangka at Norbulingka Institute, Dharamsala
Following the founding of the Sakya order in 1073, the Sakya tradition rose to prominence in Tibet in the 12th and 13th centuries through the efforts of five great Sakya masters. These five masters - known as 'Jetsun Gongma Nga' - are regarded as the real founders of the Sakya tradition.

Sachen Kunga Nyingpo, the son of Khon Konchok Gyalpo. Through his efforts, hundreds of sutras and tantras as well as oral instructions were gathered and became the basis for the Sakya canon. He brought the precious Lam Dre teachings and Mahakala practice into the Sakya order, and firmly established the Sakya tradition of great learning and meditation. At the age of twelve, on the instruction of his guru, he performed six months of single-pointed practice until Manjushri appeared to him and gave him the famous four line instruction known as "Parting from the Four Attachments". Realising instantly that all the points of the path of perfections were contained in those four lines, he became an emanation of Manjushri and needed to hear a teaching only once in order to realise its profound meaning.
Parting from the Four Attachments:

​Loppon Sonam Tsemo who succeeded Sachen Kunga Nyingpo as the fourth patriarch of the Sakya school. By the time he was 18, his reputation for learning had spread far and wide and he had mastered the threefold training of teaching, debate and composition. He taught both the sutra and tantra skilfully according to the needs of each disciple. He was a great scholar and, through long periods of intensive meditation, he attained the highest stage of realisation.


Jetsun Dakpa Gyaltsen, the fifth patriarch of the Sakya school. He was a prolific writer, and as in all his deeds, the focus of his compositions was the benefit of all beings. He became a celebrated scholar, capable of extinguishing all doubt concerning the profound view. He achieved high realisations and whatever he received he offered to the gurus and the Triple Gem, or gave to those in poverty.

Sakya Pandita, the sixth patriarch of the Sakya order, who was the most famous of all for his knowledge and scholasticism which spread as far as Mongolia and China. His intellect was unmatched, he realised the meaning of every scripture exactly and correctly, all of his speech was flawless, and his statements faultless.

Chogyal Phakpa, the seventh throneholder and the nephew of Sakya Pandita. During his time, the Sakya tradition flourished with the introduction of Mahayana Buddhism into China and Mongolia. Throughout his life, Chogyal Phagpa engaged in many activities such as preaching the Dharma and building great monasteries. He ordained thousands of monks each year and worked diligently for the benefit of the Buddha's doctrine and for sentient beings.