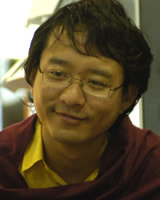 His Eminence then joined Sakya Centre, the main monastery and seat of His Holiness the Sakya Trizin, where he learned all the basic rituals and prayers.  Following the completion of his studies and training at Sakya Centre he joined Sakya College and furthered his studies in Buddhist philosophy for next five years.  During this period, he often participated in the religious ceremonies held annually at the Sakya Centre.  He has also received many major initiations, common and uncommon teachings from His Holiness.

Gyana Project
After five years of study at Sakya College, he sought leave from the college to fulfil his other religious duties and commenced his first major programme, the Gyana Project.  The Gyana Project involves the translation of Sakya teachings and commentaries into English, and has received blessings from His Holiness the Sakya Trizin, His Eminence Chogye Trichen Rinpoche and His Eminence Ngor Luding Khen Rinpoche.

In a message His Holiness the 41st Sakya Trizin said:
To expound the history of the Sakya School, the teachings of the five founding masters of Sakya Lineage and the Six Elegant Ornaments of the Land of Snows, the collection of their grand essence teachings and their translation in English is essential.  If such a publication is possible, then it would be of great benefit to the western academics and the students of Dharma. Such a collected work would give a complete insight to the whole Buddhist canon of Tantra and Sutra (Vinaya, Prajnaparamita, Madhyamika, Adhidharma, Pramana and differentiating the three vows). The unique approach and method of teaching and commentary of the great Sakyapa masters have been highly revered and studied intensively for centuries in Tibet.

So far, these important works have been used and studied mainly by Tibetans and Tibetan speaking community because any form of their translation is rare.  The project is undertaken keeping this in mind and is for the benefit of all students and followers of the Sakyapa School and Dharma in general.

The project was first conceived by the late Khenpo Migmar Tsering who was the then Abbot and Principal of the Sakya College.  His sudden illness and demise was a great loss not only for his students and the Sakya tradition, but also to the entire Dharma community.  During the late Khenpo's final days, Rinpoche promised his teacher that he would work to fulfill his teacher's dream.

Sakya Academy Project
His Eminence is also realising the aims of the Sakya Academy Project, initiated by His Holiness the Sakya Trizin.  The principle aim of the Sakya Academy is to impart young novices a good Buddhist education, as well as a modern curriculum including mathematics and science to ensure the young monks' Buddhist learning is relevant to the wider world.  A secondary aim is the preservation and dissemination of the precious Dharma teachings of Lord Buddha, and to preserve the unique teachings and tradition of the Sakyapa masters, so that they will benefit generations to come.