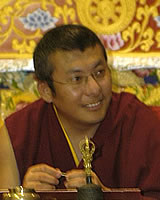 As a child, His Eminence Luding Khen Rinpoche was selected to be trained as the successor to the abbot of the Ngor Monastery and was sent to Ngor Monastery in Manduwalla, India to undergo the rigorous training that is a prerequisite for lineage holders.  For the next two decades, he trained intensively under the daily tutelage of then senior Ngor abbot His Eminence Luding Khenchen Rinpoche, Jamyang Tenpei Nyima.  He also received many teachings and empowerments directly from His Holiness the Sakya Trizin.

His Eminence's training as a lineage holder included all of the common and uncommon teachings of the Sakya tradition.  From the tantra, he studied and mastered the precious Lam Dre teaching, the Collection of All the Tantras, Collection of All the Sadhanas and many others, and accomplished all of the many retreats required for a vajra master.  From the sutra, he spent many years at Sakya College studying religious philosophy under the direction of the famous Khenpo Migmar Tsering.  As a result, His Eminence is exceptionally well trained in both tantra and sutra.

Having completed his training as successor to headship of Ngor Monastery, His Eminence Luding Khen Rinpoche was enthroned as abbot in March 2000.  At that time, the senior Ngor abbot, Jamyang Tenpei Nyima retired from active service as the abbot, a post that he had held wisely and well for over 45 years.