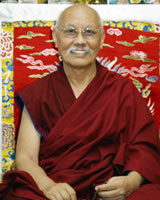 His Eminence Luding Khenchen Rinpoche, Jamyang Tenpei Nyima, is one of the most highly respected and learned teachers of the Sakya tradition and of Tibetan Buddhism at large. He is believed to be the emanation of Vajrapani and was born in 1931 to the noble family of Shang, Sharchen or Ludingpa, which is renowned for producing great scholars and siddhas.

At the age of ten, according to the Luding lineage, he was ordained as a monk by his uncle and root guru, the most gracious Khenchen Sharchen Jamyang Thupten Lungtok Gyaltsen Palsangpo. As befitted a major lineage holder, he was given extensive training by the best teachers in the Sakya and other traditions. He undertook innumerable major and minor retreats, practising almost all the deities of the Sakya and the Ngor traditions.

In 1954, a t the age of 24, His Eminence was enthroned as the 75th chief abbot of Ngor Ewan Choedhe Monastery, succeeding his teacher and uncle, the former Ngor Abbot Jamyang Thupten Lungtog Gyaltsen. For 500 years, Ngor Monastery has been the head of hundreds of other branch monasteries, and its school of ritual studies has been the citadel of training and practice of tantric ritual in the Sakya tradition.

The position of the head abbot of Ngor was traditionally held for a three year period, in which extensive teachings are given, almost non-stop, of which Lam Dre and the Seven Mandalas of the Ngor were the main teachings. The three year tenure as chief abbot of Ngor Monastery would normally alternate between four Ngor Houses (Ladrangs): Luding, Khangsar, Thartse and Phende. Since leaving Tibet, due to the disruption to the Ngor monastic system, His Eminence held this post for over 45 years, up to 16 March 2000, when he handed the abbotship to his nephew, His Eminence Luding Khen Rinpoche.

In 1959-60, due to political changes in Tibet, His Eminence relocated to India, where he began the great work of re-establishing the Sakya lineage in the land of the Buddha's birth. His Eminence collected those monks who had come from Tibet, established a school of ritual studies, and established the Ngor Monastery in Gangtok, Sikkim, and re-established the Ngor Ewan Choedhe Monastery in Manduwalla, Dehra Dun in North India, where he has since resided.

His Eminence has contributed greatly to the Buddha Dharma by bestowing extensive Dharma teachings, empowerments, oral transmission and re-establishing summer retreats in almost all of the Sakya monasteries in India, Nepal and other Sakya centres around the world. He has given the precious Lam Dre teachings both common and uncommon many times, countless number of initiations and teaching on the Thirteen Golden Dharmas of the Sakya tradition, the Seven Mandalas of Ngor tradition, and major and minor deities of the Sakya and Ngor tradition. Since Tibet was reopened to teaching visits by high lamas, His Eminence has travelled to Tibet several times, where he spent time at over 80 Sakya monasteries, helping them to re-establish themselves spiritually, educationally, and financially.

His Eminence is also the lineage holder of the teachings on the collection of the tantras and the collection of sadhanas, which he received from His Holiness the Sakya Trizin. He has been teaching and passing on the wisdom of his lineage for his entire life and has ordained over 10,000 monks and nuns in this time.

Extraordinarily learned, the embodiment of compassion, His Eminence's presence radiates peace and wisdom. Through his great efforts, the Ngor lineage has not only been re-established, it has been spread throughout the world.