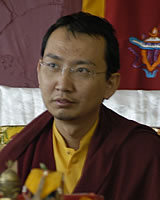 In March 2017, His Holiness accepted the mantle of leadership from his esteemed father and root guru, in his new capacity as the 42nd Sakya Trizin or throne holder of the lineage. In doing so, he will continue to guide and inspire Dharma students from all over the world with his wisdom, genuine qualities of unaffected simplicity, humility and complete honesty, by presenting the Buddha’s teachings in the most authentic way, while maintaining the purest of Buddhist traditions.​

His Eminence Ratna Vajra Rinpoche, eldest son of His Holiness the Sakya Trizin, is one of the most important young lineage holders and a descendant of the Khon family - successive generations of which have continued an unbroken lineage of great and famous masters.

Born on 19 November 1974 in Dehradun, Uttar Pradesh, India, His Holiness was from birth the recipient of blessings, initiations and teachings from many high lamas, including his own father, to increase his capacity for knowledge and wisdom.

In his childhood, he travelled widely in India as well as many other countries with his parents.  At the age of six, he began his formal education under the tutorship of Venerable Rinchen Sangpo.  In the next few years, he studied Tibetan reading, writing, grammar, memorisation and recitation of basic prayers and rituals.

The following year, he joined the Sakya College and studied there for the next seven years.  In 1998, His Eminence finished his Kachupa degree, which is equivalent to a Bachelor's Degree.

During this period, His Holiness received many exoteric and esoteric teachings, empowerments, blessings, initiations, oral transmissions, explanations and pith instructions from his father and also the foremost high lamas and scholars of this age, such as His Holiness the 14th Dalai Lama, His Eminences Chogye Trichen Rinpoche and Luding Khenchen Rinpoche.

His Holiness has accompanied his father, His Holiness the 41st Sakya Trizin, on many teaching tours around the world.  He has given many teachings and initiations in India and abroad and has also done many retreats on the principal deities of the Sakyapa order.

Presently, he stays at the Sakya Dolma Phodrang, the palace of His Holiness the Sakya Trizin, and accompanies His Holiness on various tours in India and abroad and also participates in regular prayer ceremonies at Sakya Centre and Dolma Phodrang.  He is widely regarded as a learned scholar of the Sakya tradition and speaks English fluently.

His Eminence Ratna Vajra Rinpoche, being the elder son of His Holiness the Sakya Trizin, is the lineage holder and on

On 12 September 2002, His Holiness married Dagmo Kalden Dunkyi, the daughter of Mr Lundrup Topden and Mrs Yangchen Drolkar at Sakya Dolma Phodrang.  In accordance with Sakya tradition the marriage was kept secret for a certain period of time and only the closest relatives of the bride and groom attended.  Their firstborn daughter Jetsunma Kunga Trinley Palter Sakya was born on 2 January 2007, on the Parinirvana Day of Sakya Pandita, thus receiving a very auspicious head start in life.

Their son, His Eminence Akasha Vajra Rinpoche, was born on 27 March 2010 in New Delhi.

His Holiness's birth took place on the 12th day of the 2nd month of the Tibetan calendar, anniversary of the Paranirvana of Jetsun Dragpa Gyaltsen, one of the Five Founding Fathers of the Sakya School of Tibetan Buddhism.  His birth was accompanied by a slight earthquake in New Delhi, an auspicious sign that a great being had entered this world.