His Holiness the Sakya Trichin​,
​the 41st Sakya Trizin

His Holiness the Sakya TriChin, the 41st Sakya Trizin 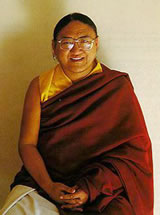 An Auspicious birth
His Holiness's grandfather had been the last Sakya Trizin in his family.  For the sake of having a son, His Holiness's parents went on a pilgrimage to Mount Kailash, to Nepal, to Lhasa, and to South Tibet, but there was never a sign that a son might be born.  They had all but given up hope when they reached the Nalanda Sakya Monastery north of Lhasa, and told the abbots about this.

The abbots were shocked and very worried, as the family lineage, the Dolma Palace line, held the traditions of the most esoteric Sakya teachings.  In addition, most of the heads of the monastery had received teachings from His Holiness' grandfather.  So the continuation of the family line was considered to be very important.

The abbots urged His Holiness's parents not to give up hope and moreover, gave up one of their best teachers, Lama Ngawang Lodro Rinchen, so that he could travel with them.  This was a loss to the monastery because he was a very powerful lama who could perform all the different rituals, and in particular, his prayers had caused children to be born to women who had been unable to have children before.

After this he travelled with His Holiness's father wherever they went and together they performed many rituals praying for a son to be born.  At last it became clear that these prayers had been answered and His Holiness' parents halted their pilgrimage at the Sakya Palace at Tsedong, a small town near Shigatse.  It was thought that this was a good place for a child to be born, perhaps for its reputation as being the birthplace of many great Sakya teachers such as Ngachang Chenpo Kunga Rinchen.  In fact His Holiness was born in the same room as Ngachang Chenpo.

His Holiness was born on an astrologically auspicious day and it is said that rainbows were seen over the house.  Other wondrous signs were noted.  An image of Guru Padmasambhava was offered to His Holiness' father and a gift of milk collected from a hundred different yaks appeared, but nobody knew where these bounties came from.  Khenpo Ngawang Dhamchoe recalls meeting a senior lama in France during the Lam Dre in 2002, who said that when His Holiness was born, light was seen twinkling on the child's forehead.

Immediately after the birth, the letter DHIH , the letter of Manjushri who represents speech and wisdom, was written on the child's tongue with special nectar made of saffron and many other things. 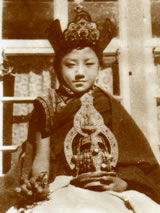 His Holiness the Sakya Trichin at an early age
Early studies
His Holiness's mother died when he was very young, and his maternal aunt, Trinley Palijor Zangmo, became like a mother to him.  His aunt was herself an outstanding practitioner, who took a key role in his upbringing especially as His Holiness' father died when he was five.  She appointed his first tutor and oversaw his early education, and later was instrumental in arranging his escape from Tibet.

His Holiness's formal education started at the age of five, although even before that he had received several empowerments from his father.  In fact, he received his first empowerment, the one of long life, as soon as he was born.

His Holiness first started by learning the alphabet, and was taught spelling seven hours a day, six days a week for nearly two years.  Tibetans say that the more you practise spelling, the faster you will be able to read.  From his tutors he learned in detail how to perform rituals and prayers in the traditions of the great Sakya monasteries.

His Holiness's religious studies began in earnest in the autumn of 1950, when he received the Esoteric Path-Result (Lam Dre) teaching from Lama Ngawang Lodro Shenpen Nyingpo, Abbot of the Khangsar Abbacy of Ngor.

The following years were filled with study, retreats, and teachings from the most revered teachers.  By the time His Holiness was nine years old he gave the Kila Consecration to his sister, Her Eminence Jetsun Kushok, and a thousand other people.  At the age of ten, he made a pilgrimage to Lhasa where he received Dharma instruction from His Holiness the 14 th Dalai Lama.  Before a large audience in the Potala Palace, he gave an extensive explanation of the mandala offering which resulted in his wisdom being proclaimed throughout Tibet.

Enthronement and exile
During 1958 many rituals were conducted in advance of the enthronement of the 41st Sakya Trizin.  The ceremony was undertaken in the first lunar month of the following year, when His Holiness was fourteen years old.  More than a thousand monks assembled and many offerings were made by senior lamas and government representatives.  The ceremony began with a seven day ritual followed by an elaborate three day ritual.

His Holiness managed to evade the Communists by letting it be known that he was going into retreat at a hermitage not far from Sakya.  He was joined by his aunt and sister and together they left by night for India accompanied by a handful of others.  The journey from Sakya to the Sikkim border and safety took five days.

He stayed at first in Sikkim where he started to learn English and then moved to Darjeeling.  Here His Holiness established the Ghoom Monastery and began the task of reassembling the Sangha.  Darjeeling became his base for the next three years.
His Holiness' Dharma studies continued apace, covering many areas including Madhyamika philosophy, Prajna-Paramita, Abhidharma and logic.
​ 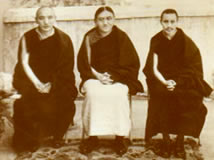 His Holiness the Sakya Trichin, His Eminences Chogye Trichen and Luding Khenchen Rinpoche
Re-establishment in India
After three years in Darjeeling mastering philosophical studies under such scholars as Khenpo Rinchen, the border war between India and China at the end of 1962 prompted another move, this time to Mussoorie in India.  This is where His Holiness in 1964 established the first Sakya Centre to function as the tradition's main monastery in exile.  His Holiness the Sakya Trizin and his tutor, Venerable Khenpo Appey Rinpoche both agreed that there was an urgent need to maintain a constant effort to preserve and revive the Dharma.  The assembly of monks moved into the Centre in 1965.

In 1972, Venerable Khenpo Appey Rinpoche founded the Sakya College in Mussoorie.  This Sakya 'university' has produced many scholars who have played an important role in revitalising Buddhist doctrine and the Sakya tradition in particular.

In the midst of all this activity, His Holiness's studies and teachings continued without interruption.  Besides continuing his study of English, from 1971 to 1972 he received the Gyude Kundu, a major collection of consecrations, from His Eminence Chogye Trichen Rinpoche.  At the age of 22, he gave the Lam Dre teachings for the first time to a large gathering at Sarnath.  In the same year, he also inaugurated the Sakya rehabilitation settlement at Puruwala in Himachel Pradesh, 40 miles from Dehra Dun.  A few years later, in 1980, His Holiness performed the opening ceremony of the main Sakya monastery, Thubten Namgyal Ling in Puruwala.

Family man
To maintain the tradition of the Khon lineage, His Holiness married Dagmo Kusho Tashi Lhakee, the daughter of the Minister of the King of Dege, in the spring of 1974 and soon after left for his first visit to the west, giving teachings in Switzerland, England, Canada, the United States and Japan.

Worldwide teaching
His Holiness's life has been committed to teaching and spreading the Dharma.
As water is poured from one vase into another, His Holiness the Sakya Trizin first received from many teachers, all of the profound teachings of the Sakya order and many of the teachings and transmissions of the other lineages of Tibetan Buddhism, and then passed on these teachings to his monks and followers around the world.

Since exile from Tibet, India has since served as a base for His Holiness to spread the Dharma throughout the world.  Besides having countless disciples in India and other eastern countries, since 1974 he has made several journeys to the west where he has taught extensively.

Due to His Holiness's efforts and influence, there are now Sakya Centres in India, Nepal, Singapore and nearly every Western country.

As Khenpo Ngawang Dhamchoe, head of Drogmi Buddhist Institute commented, "We are more than fortunate that His Holiness is visiting Australia again.  In Tibet, pilgrims would walk hundreds of miles, even thousands, to receive blessings or to have an audience with him.  We are so fortunate that such a master is coming to our doorstep!"

It is wonderful to be in his presence, an immense blessing that naturally subdues negative energies.  It is being in the presence of a real Buddha.  (Khenpo Ngawang Damchoe)
Return to Sakya masters
Find out more:
The Sakya tradition
The Sakya lineage
The five Sakya founders
Sakya masters
Throneholders of Sakya
Lam Dre